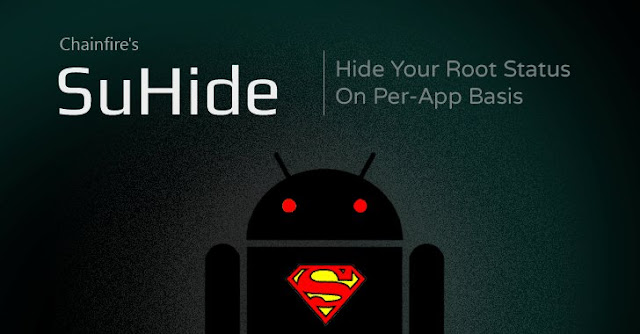 It is not longer new that almost 73% of android users have their android phone rooted.Rooting an android phone can bring a lot of benefits by giving full access to your android  and also a rooted phone has a disadvantage which include lossing access to certain apps like banking,payment and other corporate security apps that works with financial and confidencial data,such as your bank details.But Unforunately such apps don’t work on rooted devices.And example of such app is Google’s Android Pay and since the app has been lauch developers have been working hard to make the app works on rooted devices but unfortunatlty they didn’t get much succes in Hijacking or bypassing the security hole of the app.

But I think you must be asking yourself “why is that rooted devices can’t use such app”The answer to this question is that Google really cares about your security.

But Here Famous Android developer Chainfire releasd an experimental hack with a new app,called “Suhide,” and the app allow users to hide the root status of their rooted android devices on an app-by-app basis

Like I said earlier that google restricted you to use some banking app as a result of your device been rooted but how does Google detectet your rooted device and restrick you with some app.Google uses something called SafetyNet API to detect wether your Android device is rooted,and restircts access to those feature.The SafeTy API works by using if you’re a custom ROM,or your device get infected with some malware,or either it has been rooted by a user and if the app detect any of this,The API blocks you or restrick with to the app.

But Now you really don’t have to worry about that cause the Suhide app developed by Chainfire,allow users to hide their rooted devices status on an app-by-app basis,and it seems to be working with Android Pay as well.
The app has been comfirmed working with application that doesn’t require a non-rooted android devices.But Unfortunalty the Suhide app work an Stock Rom to bypass and beat the Google SafetyNet based on Android Marshmallow 6.0 and higher.

But there are chances that Google will will eventually catch Suhide app and other pottential hack that allow Android Users to hide their rooted devices status.But for now you can enjoy the app and don’t forget to share this post among your friends by using the share button below the post