Not long after the Indian Company is known as Ringing Bell Company just introduced the cheapest smartphone in the world.Now they have made another history again by the world cheapest 14-inch laptop.RDP’S ThinBook is the device and claims to be just RS 9,999 for the device.The good thing is that the laptop is not just the cheapest laptop but also comes with a good spec with you might want to know. 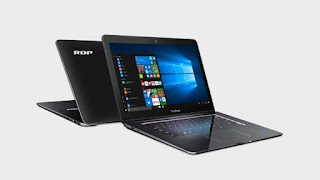 The RDP ThinBook is a 14-inch device with a screen resolution of 1366*768.It has 2gb of Ram,32gb of storage capacity and also has a battery lenght of 10000mah.It has a CPU of an Intel Atom X5-z00,which a 1.8ghz quad core chip.We’ve been able to see mobile phones with a better specification,but ntohing like a 14-inch screen.The laptop was annouced on 3 August.Rao annouced the device in the present of country General Manager,Consumer Channel Group,Microsoft India and some others.A source report said:The device was to be designed in Hyderabad and built in Taiwan but they plan to built it in Telangara.The comapany said to have invested an amount estimated to $7-8 million so far but they have been able to earn $4 million as their revenue during the last fianacial year