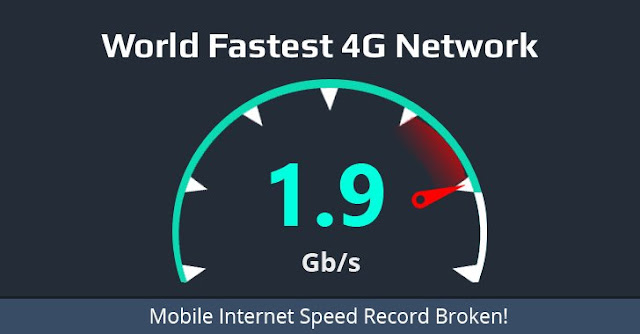 Currently,the United Kingdom and the Sweden have been crowned as the top countries across the world when it comes to fastest mobile 3G and 4G speeds,but recently Finland has been working hard to be among the competitive country for the fastest mobile internet speed.

Elisa was reported to have set such an amazing breaking record benchmark with the help of technology provided by Chinese Telecom Giany Huawei that could allow someone to download a Blu-ray film in just 30-42 seconds.

The Future Of  Mobile Network With 4G and 5G

February last year,a team of researchers from the University of Surrey managed to achieve a record breaking speed of 1 Terabit per second (1Tbps) during a test of 5G wireless data connections, which is said to be over 500 times faster than Elisa’s 4G speed
While,in June last year,the international Telecommunication Union (ITU) decided that 5G compliant Internet Internet providers will have to provide a standard data speed of up to 20Gbps,which is 10 times faster than Elisa’s 4G speed
I think the speed 4G are offering right now are continuously increasing every day but we should be expecting more cause in the year to come there will connection of several gigabytes per second for mobile data connection.You can also drop your view about this progress by using the comment box.